Ballroom Dancing Helps Iowa Man get back on his Feet

Doug and Jill Beardsley twirled and glided across the floor one recent Thursday afternoon. The two have danced together since 1980, when they were both students at Brigham Young University.

But on that particular day the Iowa City couple weren’t doing the fox trot across a ballroom — instead they were in UnityPoint Health-St. Luke’s Hospital’s Physical Medicine and Rehabilitation gym.

Doug was wearing a helmet and a harness, which was connected to a track on the ceiling by a rope. The harness provided support to prevent him from falling as he moved from one end of the gym to the other, keeping time with the music.

It was only a month before that Doug was admitted to the University of Iowa Hospitals and Clinics with an infection that required brain surgery. He was transferred to St. Luke’s the day before Thanksgiving.

He lost seven pounds and has had to work to regain strength, mobility and cognitive skills such as remaining focused on a task. He’s been working intensively with physical, occupational, speech and music therapists.

But it was that new piece of equipment at the hospital that really helped his healing. 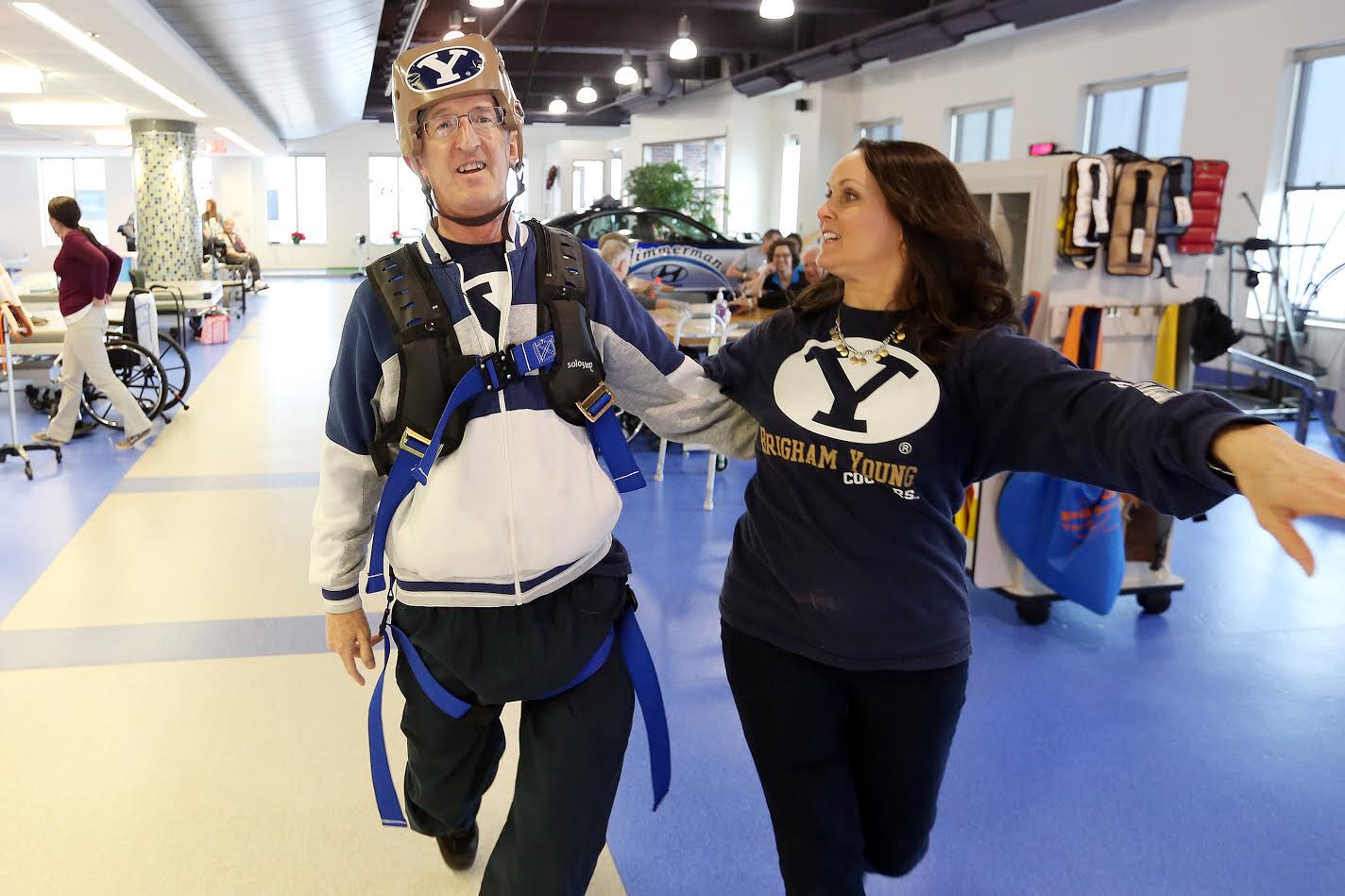 The harness and track system — the Solo Step — was installed about a month ago, said Kevin Komenda, a physical therapist at the hospital.

Therapists have used it to work with patients who’ve had a stroke or spinal cord and brain injuries along with those who have Parkinson’s disease or multiple sclerosis, among other challenges, he said.

The Solo-Step gives patients security and confidence, so they are able to work on more difficult activities while also helping prevent injury for the physical and occupational therapists.

Therapists are prone to lower back injuries and shoulder pain, Komenda said, because they have to help lift patients and catch them if they fall.

The harness is a way for patients to work on mobility and balance — whether they’re walking on a treadmill, walking up stairs or even shooting a basketball.

“We never imagined using it for ballroom dancing,” Komenda said.

The realization came to Komenda and the Beardsleys one day during a music therapy session. Jill told Doug to hold his arm as he would as if he were doing the cha-cha.

From there, they’ve gotten into a groove, incorporating ballroom dancing into his physical therapy. The couple is able to spin and move almost effortlessly.

“If you can find something that someone is passionate about — it really helps with recovery,” Komenda said. “You get more out of it.”

“It’s been very helpful,” Doug said of the dancing. “And I get to spend time with my favorite person in the world.”